Missions has always been a part of my life; from birth actually.

I was born at a mission hospital in Hilongos, Leyte, Philippines where my parents, Ken and Alice Cole, were serving as medical missionaries. I spent my childhood in the Philippines growing up as missionary kid (MK). I attended Faith Academy, an MK school in Manila, Philippines, the city where my parents had transferred and were involved in church planting. Following graduation from Faith Academy I returned to the US to attend Cedarville University. At Cedarville University studied nursing but I also had the opportunity to receive minors in Bible and Cross-cultural nursing. It was also at Cedarville University that I was introduced to the opportunities the US Navy provides for nurses. Of particular interest to me was the opportunity to travel the world using my nursing skills to help others.  I graduated from Cedarville University with a Bachelor in Science, Nursing (BSN) degree and was immediately commissioned into the US Navy Nurse Corps. In March 2014, after spending more than 9 years serving in the Navy around the world and in a variety of roles, I left active duty military service.

Growing up on the mission field exposed me to foreign missions and the great physical and spiritual needs found throughout the world. My parents encouraged my siblings and me to be actively involved with them in their ministry. I was able to experience first hand the highs and lows of missions work even if it was from a child’s perspective. The truth of II Timothy 3:5 was very evident to me in the Philippines as I saw many outward signs of godliness but the truth that salvation is found in Christ only was missing. The Lord gave me the chance to return to the Philippines while in college to spend 2 months at mission hospital and then the chance to assist a medical missions group in Thailand with my parents in 2007.  These experiences once again exposed me to the great physical and spiritual needs of so many people.

As I considered different career options post-Navy I felt the Lord directing me back to medical missions. I contacted ABWE inquiring of the need for nurses at any of the mission hopsitals and received an enthusiastic YES!! Almost immediately I received emails from several medical missionaries letting me know of the opportunities to use my nursing skills on the mission field. This was how I first heard about the Hospital of Hope in Mango, Togo. I was intrigued with this opportunity to help with the opening of this hospital in an area in desperate need of medical care. After seeking the godly counsel of my parents and pastor and spending time in prayer, I made the decision to pursue this opportunity.

My original commitment of 12 months became 16 months during which time I served as nursing supervisor at the hospital. During my time in Togo I met Anna, a career ABWE missionary nurse who was also serving at the Hospital of Hope.

I grew up in a loving Christian home in Grand Rapids, Michigan. I accepted Christ as my Savior at a young age and was baptized in my local church, Highland Hills Baptist Church. I can now clearly see how God faithfully equipped me throughout my life, in big and small ways, for full-time ministry in missions. While attending summer camp at age 13, I was challenged by a chapel message on I Corinthians 6:19-20, “You are not your own, you were bought with a price.” For the first time I realized that my life was not mine to live simply as I wished. Christ had paid the ultimate price for my freedom, and therefore my response as a forgiven sinner should be to willingly lay my life down for Him. So that day I devoted my life to serving God—no matter where that took me and however He chose to use me. Throughout my high school and college years I had the opportunity to go on short term missions trips to Salt Lake City, Mexico, France, and South Africa. All of these trips pushed me outside of the familiar and comfortable life I had always lived and challenged me to go further for God; to surrender my all for Him. Slowly I relinquished my future and my plans, yielding all to Him. It wasn’t an easy process, nor a fast one. But God graciously brought me along, preparing my heart for full-time ministry. 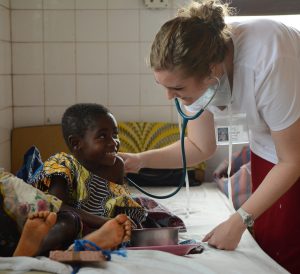 Growing up it was clear that I would end up in the medical field. It was what I’d always wanted to do. However, during my freshmen year of college I felt the Lord asking me to give this lifelong dream to Him and to trust His plans, even if this didn’t involve nursing as I’d always planned for and expected. This was a challenging decision to make and it didn’t come without many tears and much resistance on my part. But once again, God was calling me to surrender, so I did. As a result I attended, what was then, Baptist Bible College (BBC) (now Clarks Summit University) and received my Bachelor of Science degree in Bible with minors in Counseling and Women’s Ministries. Through several ministry opportunities while at BBC, I felt the Lord’s call on my life into full time missions. God used one opportunity in particular, a four-month mission trip to South Africa, to burden me for medical missions. After five years of surrender, God gave me back my dream of becoming a nurse. But this time I knew I wasn’t going to use this skill in the US healthcare system, but for a much greater purpose. It was during that time spent focused on God and full-time ministry rather than on nursing that He refocused the direction of my life. And then, once I was fully surrendered to His plans, He gave back the dream that He had placed in me since childhood. Finally, after five long years, it all made sense. I received her Bachelor of Science in Nursing from Grand Valley State University in 2012. During my time in nursing school I was appointed by ABWE for full-time missionary service to Mango, Togo.

With all of my support raised, I was able to leave for language school in France in the fall of 2013 and, after completing my French language school, I arrived in Togo in July 2014. While there I had the privilege of helping to open the Hospital of HOpe in March 2015 and primarily ministered as a full-time floor nurse. During my first year on the field I met a short-term missionary nurse named Mike.

We began dating five months after meeting at the Hospital of Hope. Over the course of the next year our relationship continued to deepen. During this time Mike also felt the Lord calling him to long-term missions. As a result, we returned to the States in April 2016 so that Mike could pursue his transition from short term to career missionary service with ABWE. We were engaged in July and married on January 7, 2017. In July 2016, we attended ABWE training and Mike was officially appointed as a career missionary with ABWE for service in Mango, Togo. He is currently working on his Master of Science in Nursing (MSN) in nurse education so that he can be involved in ongoing nurses training at HoH. Anna looks forward to returning to Mango and desires to be involved with community health evangelism and mobile clinics in the future. We are very thankful for how God brought our lives together and are excited to return to Togo as a ministry team! 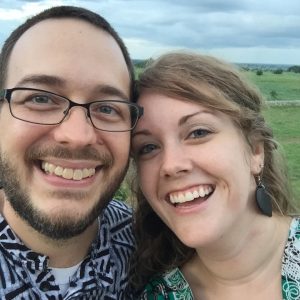 While in Togo we fell in love with the Togolese people: their generosity, kindness, hospitality, positivity despite incredible poverty, and also saw firsthand their great physical and spiritual needs. Standing on the hospital property and feeling the West African dirt between our toes, we have been able to witness lives changed for eternity on that plot of land. Mike and Anna are so excited to one day introduce you to the many Togolese in Heaven who surrendered to Christ through the ministry of HoH! We are both humbled and excited that God has called us to be a part of what He is accomplishing there. He is working mighty wonders and we are blessed to have a front row seat to the display of His life-transforming power in Mango, Togo! We would love to sit down and share our passion for the Togolese with you. If interested, please contact us!